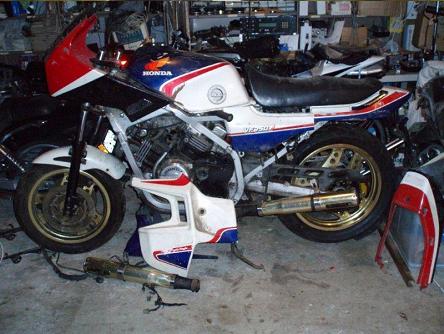 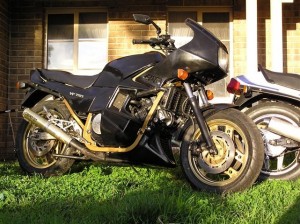 This bike was my first VF experience – it came to me as a wreck in pieces, however with most of the replacement parts sourced as the previous owner was going to rebuild it – but got a blackbird instead at a bargain price.

To the right you can see a shot of all the parts just piled up roughly in place. This bike had been lowsided on a mountain road with not much damage – until a car came around the corner and ran over the front end ……. 17 years ago.

While I like the RWB colour scheme I decided to try a black and gold scheme due to the gold wheels – and the  presence of the optional cyclestyle side fairings.

Many things were done in the course of this rebuild, bearings, steering bearings, refurbishment of virtually every part not inside the engine.

An oil mod was added, the cams looked ok though so that was good.

Once running she was running well but I could never get her to hold temperature in heavy traffic. I’m convinced this was due to a hairline crack in the cylinder wall that would open up and cause the coolant temperature to rise.

Eventually a combination of the heat and a drop in oil pressure resulted in a big end failure – trying to limp back home ( I got to 10km from home) caused a more catastrophic engine failure with broken con rod, smashed piston and a cloud of coolant steam.

I was able to pick up another “ratbike” vf750f for a bargain price and that engine is in her now – with the best of the cams – Shes running really well but could use a new set of rings and a hone – rings are on the way. 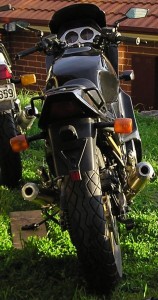 Not many changes from stock on this one –

To many other bits refurbished and replaced to mention.
I have another 4 into 1 exhaust, virtually new that I can swap in to drop the weight, still thinking on that one.

She now has the 4 into 1 fitted and its much lighter and nastier sounding.

Removed he aftermarket side fairings (cyclestyle) – after 30 odd years the plastic they are made from has become to brittle – they just keep breaking, so I’ve put them away in case someone decides they want to make moulds from them in the future?

But due for a refurb as there are a few things I’d like to address.