This is the prefered option – unless you specifically need the dual CDI / TAI  capability.

This started with the development of the CDI ignition replacement. For the history on that see here.

In 1982 Honda pretty much changed from the CDI system on the CX to a 12V TAI system, in line with many of the other bikes coming off its production line at this time and in line with other manufacturers and the move away from points based systems.

Along with the change in the ignition there were also some design revisions to the engine in the form of the camshaft lift and duration and a more rapid advance profile.

While the specs of the bike remained the “same” there is a noticeable difference in the drivability and acceleration between the original and the reworked engine of the 500 and obviously a further power increase with the availability of the 650 engine in 1983. (NOT talking about the turbos here …)

These bikes use a mechanical centrifugal advance assembly – springs and weights that provide ignition advance by rotating the trigger assembly relative to the stationary trigger coils. This is a lot simpler than the previous arrangement with multiple trigger coils, advance coils and charging coils on the stator and was intended to be a more long term reliable solution at the expense of a small amount of maintenance to make sure the advance mechanism it is not stuck and moves freely.

The trigger coils for the TAI mechanical advance system are of fairly standard design– similar to those used on the DOHC CB 750/900s but are just different enough to unique to the CX  – and of course no longer available new. These are starting to fail with age, with no effective replacement available – until now.

So the solution:  an extension of the Hall Effect sensor from the CDI system to drive the TAI bikes.

The same trigger rotor is used just with the magnet in the alternate location, and a new circuit board with different code and driving 12V coils instead of the CDI modules, that mounts from the rear case.

The picture below shows the board mounted on a TAI rear cover with the rotor in place. (prototype) 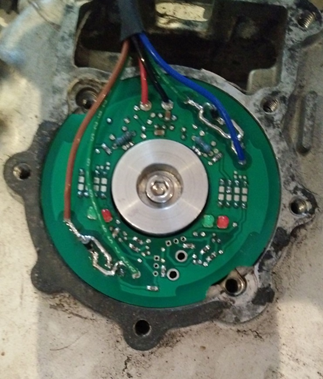 HOW DO I INSTALL IT?

Installation is simple but requires access to the rear of the engine to remove the old mechanical advance unit – please see link below to the installation manual.

HOW DO I KNOW WHICH ONE I NEED?

There are only two variants – and the hardware is the same – the differences are in the pre-programmed software for the 650/700 or the 500. The 650/700 has START ASSIST build in whereas the 500 does not. The timing curves and RPM limits are set differently for the two different engines.

The Installation manual found at the end of this page by following the link has a detailed instructions.

Please indicate your bike model and year in the order so that jumpers can be pre-configured for you.
(500 / 650 C/EC/ED/GL)

The Kit is shown below and includes: (Note: this is the prototype – so ICs are in sockets and no coating has been applied yet.)

WHAT DO I GET?

All Rae-San products come with a 12 month return to base warranty against manufacturing faults and product failure as a matter of course.

You’ll get the unit itself, a copy of the installation instructions for the variant you’ve chosen and email support if needed to help you get installed and operational.

date or to suit different bike.