This is the original “Raymodule”. It’s a small metal box – 112mm x 61mm x 31mm that allows your CDI bike to continue running when the high voltage stator coils have failed – without replacing the stator.
Some bikes – most notably the Honda CX require the complete removal of the engine to replace the stator.

WHAT DOES IT DO?

The CDI Power power  module replaces the Stator high voltage coils by generating the necessary high DC voltage – around 150 to 200V DC from the bikes 12V system. It also does some clever stuff to sense when the ignition fires and removes the voltage – allowing the ignition SCR in the CDI to turn off, and then after it detects that the SCR is off, re-applies the power – but at a controlled charge rate to charge the capacitors back up in the CDI ready for the next ignition event. It does not provide any different ignition timing as the original CDI and ignition triggers are still used, it allows the factory ignition modules to continue to be used with a failed or failing CDI stator coils.

The description here refers to CDI – Capacitive Discharge Ignition. Often motorcycles ignitions are referred to as CDI boxes – when a lot of the time they are NOT. If your ignition coils or the ignition module runs of the 12V of the bikes electrics then it is a for of TAI – Transistor Assisted Ignition and Not CDI.
CDI ignitions usually have A Blue and/or White wire that supplies power from a separate set of coils on the stator. The Ignition Coils look the same as 12V ones but often only have 1 wire going to them from the CDI as the other connection to the coil is the bike chassis. These CDI coils measure < 1 Ohm in resistance to the frame whereas 12V coils will normally be in the range of 3-5 ohms between the usually 2 terminals

HOW DOES IT WORK? 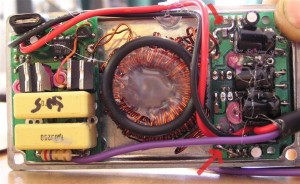 Above is shown an early internal image of the module before final assembly. The power transistors used are mounted underneath the boards and cant be seen here. This has been done to minimise the size of the module.

There are three stages that can be seen. At the far right is a push pull switchmode power supply that drives the transformer in the centre. This runs at approximately 48KHz and generates 150 – 200V AC.

It has overvoltage shutdown so that if the bikes battery voltage rises above 15V due to a regulator failure – the unit will shut down and stopping ignition – protecting your bike electrics and battery. The unit works down to a battery voltage of 9V or so to allow for  a tired battery when starting.

The AC voltage is fed from the transformers to a set of  ultrafast diodes to rectify the voltage which is stored and filtered by the two capacitors. A control circuit is used to sense when the output voltage provided and when the output gets short circuited the voltage drive to the output is removed.

The controller then tests to see when the short circuit has been removed due to the completion of the spark – and applies the voltage again, but through a controlled constant current source at around 300mA. This prevents false triggering of the SCR in CDI due to fast changing voltages.

HOW DO I INSTALL IT?

The picture below shows a typical installation on a cx500. 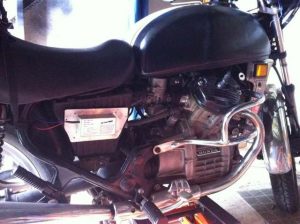 airbox – and the plate was just screwed to the plastic airbox using self tapping screws.

This is then hidden under the RHS side cover.

The unit has also been mounted under the seat and tucked in near the snorkel on the airbox.

Anywhere that is sheltered from the weather and close to the ignition module with reasonable wiring to the coils is suitable.

The unit is not waterproof – so providing some shelter is a good idea.

An inline fuse is also a good protection measure if running from the main or unfused bike power.

WHAT DO I GET?

All Rae-San products come with a 12 month return to base warranty against manufacturing faults and product failure as a matter of course.

You’ll get the unit itself, a copy of the installation instructions and email support if needed to help you get installed and operational.